The Royal Australian Air Force celebrated its 50th anniversary in 1971. To celebrate, there was a series of air shows held at the major RAAF bases at all Australian Capital cities. The highlight of the shows was a seven aircraft formation aerobatic team of front-line fighter aircraft – the magnificent Mirage. The team was formed six months in advance and worked up from small formations to the complete team of seven aircraft. Over time, the display became more complex and more spectacular. This small book is an important record of the development of the display and describes the feeling of being a vital and trusted member of the team – each member totally reliant of the skill and concentration of the other members of the formation. 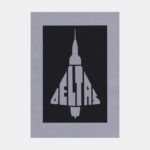